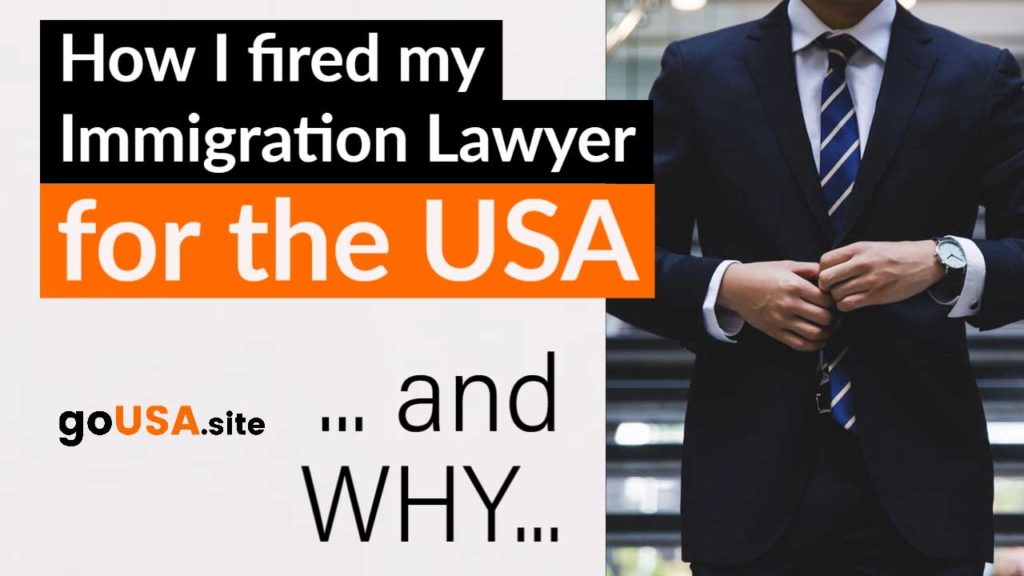 US Lawyer wanted to send me back to Austria after investing more than $ 250,000 to emigrate to the USA . How I responded and fired my US attorney.

Probably one of the craziest stories I’ve ever experienced. After working and living in America for more than a year and emigrating with my family to the USA, I got a huge setback after a year.

The US lawyer for my company was a rivet and would have cost me almost a quarter of a million euros in damage. What did I do with this “lawyer bottle”? And how did this crazy situation come about?

That was how the madness had started

Emigration to the USA : Everything had started so well. I emigrated to beautiful North Carolina with my three small children and with my wife at the time (now ex-wife… yes, yes, yes .. the tough bachelor life… lol;).

Once there, I bought a small house on the lake / Lake Wylie. Our house was not a huge villa, but still very nice and cozy – and above all, I was able to buy the house in bar. Here is a snapshot of our first house in the USA.

Well. So after we settled in our little house with sack and pack and I went to work hard and hard, in the meantime a dark black cloud brewed in the company.

To get the story straight. We then emigrated to the USA, had met all the conditions, but then the American lawyer wanted to explain to me that my training would not be enough to apply for the next visa.

She said I had to have a college degree. And you wanted to send me to college. She said you could only apply for a student visa because my qualifications would not be enough.

So much for that if you want to emigrate to the USA .

After investing over a quarter of a million euros and the lawyer had given me a relatively indifferent face, I realized that I had to act immediately.

Said and done. I hadn’t accepted your answer, and in the discussions I replied that I thought you didn’t know what you were talking about. The good lady got really mad. But to be honest, I didn’t care whether she got mad or not.

Because I wanted to live with my family in the United States. And after all that we had achieved, I would definitely not accept that from the lawyer.

After doing some research, I finally hired three more lawyers. And at your own expense. After the first interviews it turned out that a US lawyer knew what she was talking about.

She said that the advice I had was unsatisfactory. Also wrong. Because there is actually a possibility for me to apply for the so-called H1B visa. Without having to go to school as a student.

It was clear to me that I needed a lawyer to help me clear up this misinformation. And also to apply for the next visa. The example shows what can go wrong when emigrating to the USA !

Anyway. I hired my lawyer on my own. And at the same time again wrote new applications in the event that the current company would not apply for a visa.

Not because the employees wanted to prevent this. No, but because the company’s lawyer claimed that you couldn’t file an application for me. And that under these circumstances this was also illegal and the company would not take this risk.

So I got three more job offers from three other companies. Yes, after I had all the trouble and made all of my applications and signed a US job … start all over again.

Back to the start – and write applications again

Said and done. After only 4 weeks, I already had three other job offers. Boom. And I had clarified everything with my own lawyer.

This was a new application for a visa. In short, I received the new visa. And a few days later in a meeting I held the lawyer under the nose of the lawyer who had assured all employees up to that point that I could never get this visa.

In my last meeting at this company, I had really embarrassed the bottle lawyer. Nobody knew that I already had the new visa in my pocket. And in the meeting, I asked the good lawyer loudly and clearly in front of all other employees whether she might not have been wrong.

Or one could have considered other efforts or possibilities to avoid having to go back to Austria with my family.

The lawyer had held against it until the very end. Until the last 5 minutes of the showdown. The finale. In which I had interrupted your babble and talk. And had made a fine speech to all employees in the group.

Showdown – the downfall of my first lawyer

A small plea if you like. This experience was a big blow for the rivet lawyer. Because an apprentice from Austria pulled out the confirmation of my new visa and presented over 30 copies, distributed to each individual who was in this meeting.

And the lawyer also received a copy of it.

Ladies & gentlemen. It was a popular festival for me.

I smiled broadly at the bottle lawyer in the face. Not to expose her, but to make it clear once and for all that she had given a damn about my case. And she didn’t care what would happen to me and my family. And under what circumstances and efforts we have already gone to the USA.

It even went so far that the best colleagues started clapping. And thought that this was a real scandal. The lawyer had said nothing about it. Her face paled. And after a brief moment of realization, she left the meeting speechless.

Life’s a bitch – guess what…

After the good lady was out of the meeting room, the colleagues started laughing. They patted my shoulder and said: Dude, that was fucked up!

Yes. Macnhmal life is just like that. Just fucked up. My opinion that I still hold until today. And I keep saying everyone.

Life’s a bitch and sometimes you’ll get fucked. So guess what. Fuck back harder!

I hope that my personal story will help you emigrate to the USA ! Cheers!

Please log in again. The login page will open in a new tab. After logging in you can close it and return to this page.